The Crusader community is like a family: close-knit, influential, and united by a love for Brother Rice High School.

Family members move away, explore greater opportunities, and create their own paths, but that doesn’t mean we shouldn’t catch up once in a while!

“Alumni Spotlight” will highlight some of Brother Rice’s most distinguished alumni and show the impact four years at 99th and Pulaski can have on one’s future.

Brendan Reidy’s alarm wakes him up every morning with the message, “Time to entertain the tri-states!” Becoming a sports journalist is a dream turned into reality for Brendan, accomplished through hard work and dedication to the craft. But before he was gracing the microphone on live television, he was entertaining Crusader fans worldwide.

Reidy, a 2017 graduate, was an active member of the ever-growing Brother Rice TV program. He learned to commentate, edit, and produce throughout his involvement, proclaiming he’s “grateful” Brother Rice offered him those opportunities at such a young age.

“BRTV taught me to be myself and let my personality shine,” said Reidy. “I made some great memories with those guys.”

“Seeing how much the program has grown in the past few years is awesome,” Brendan said. “Mr. Creed has done an amazing job of making BRTV a reason students want to come to Brother Rice. It’s a family in itself.”

Brendan went on to attend Western Illinois University, where his journalism career skyrocketed. He became the play-by-play announcer for basketball and football games while hosting an award-winning TV series, “Leatherneck Insider,” which covered the top stories in sports around campus.

It didn’t take long for Brendan to be noticed, as he was hired as a multimedia sports journalist for WGEM in Quincy, Illinois, early 2021. Brendan now reports on WGEM-TV and co-hosts “WGEM SportsCenter” weekdays on WGEM radio.

“I’m very grateful to have a job in such a competitive field,” said Brendan. “I credit a lot of that to the experience I got at Brother Rice.”

When asked what his favorite and least favorite parts of the job were, Brendan didn’t have much to say on the negative side: “Adjusting to different schedules can be challenging, but I like a challenge. I do better under pressure.”

“I love being on air,” Reidy said. “I’ve always loved the spotlight, being in front of a camera and microphone.”

Brendan strives to stay true to himself and understands the importance of enjoying what you do. “I want people to listen and think of me as a fun, knowledgeable guy who just loves sports.”

Despite the fame of being a TV personality, Brendan will never forget his roots: “Brother Rice is home. It made me into the man I am today. The material I learned gave me a step ahead of most people when I got to college.”

“It really is a family. The teachers are always so proud and happy to see their students succeed. Mr. Creed was one of the first people I told when I got the job at WGEM!”

If you could give current students one piece of advice, what would it be?

“Work hard. Show ambition. Hard work will pay off in the end. Don’t go into a profession because of the money, fame, or clout. Do what you love.

“Ms. Pacetti had catchphrases on the walls of her classroom from famous broadcasters, so I came up with my own as a joke. I blew up a picture of my face and catchphrase together, and taped it to the wall in the broadcasting room expecting it to be taken down. It stayed up for the rest of my time at Brother Rice.”

Brendan tries to attend as many sporting events as he can while continuing to stay connected to the mentors that guided him along the way. He tunes in to Brother Rice TV broadcasts frequently, and looks forward to seeing the continued growth and success of the school. 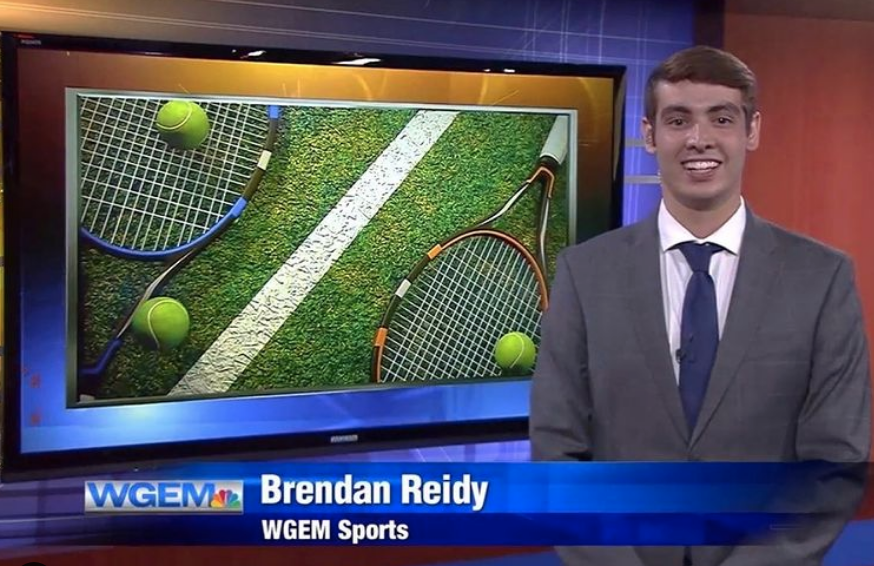