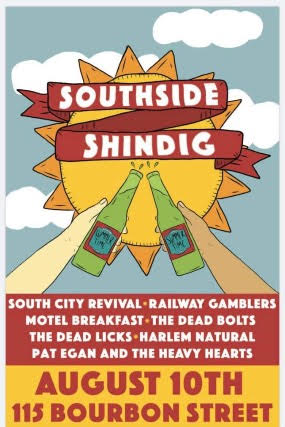 There is a burgeoning music scene on the Southwest side of Chicago, and several Brother Rice alumni are helping music fans take notice.

This Saturday, August 10, 2019, seven bands with south side roots take the stage at the inaugural Southside Shindig Music Fest, held at 115 Bourbon Street in Merrionette Park, from 3:00 p.m. until midnight.  Scheduled to appear are Pat Egan & the Heavy Hearts, Harlem Natural, The Dead Bolts, The Dead Licks, Motel Breakfast, Railway Gamblers, and festival headliners South City Revival.  The bands will all play their original music.  The festival will also include an art gallery with works by local artists.  This event is 21+ and $20 grants admission for the entire fest. Click on the ticket link here, or click the button below.

The Crusader connection is evident: The Dead Bolts’ John Rolence (guitars and harmonies) and James Ryan (drums) both graduated from Brother Rice in 2016; the Dead Licks’ drummer, Jimmy Gallagher, in 2014.  The Railway Gamblers also feature two former Crusaders: Matt Fricks, ‘10, on lead guitar and Sean Wilmsen, ‘10, on drums. Finally, South City Revival’s pedal steel guitar player, Brendan Linnane, graduated in 2007.  That’s a gathering of Brother Rice alumni musicians spanning the course of a decade. Of course, many of these guys entertained during home basketball games in Brother Rice’s pep band when they attended school at 99th and Pulaski.

The idea for organizing Southside Shindig stemmed from a perceived void in such local festivals of its kind, ones that usually find a home on the northside.  “Original music hasn’t always been as prominent on the south side, which has gained a reputation for cover bands and party music, and there’s nothing wrong with that:  We’ve all grown up listening to radio hits and having fun playing covers,” says the Dead Bolts’ 21-year-old Rolence, who with bandmate Ryan has been entertaining south side audiences since the second grade in the band’s first incarnation, The Bolts.  “But recently, we’ve seen a surge in rock bands on the south side, bands that write and play their own music, and a real scene is emerging. Everyone is trying to keep rock music relevant, and audiences are interested. Organizing a festival just seemed natural, and when we asked the other bands, the response was unanimously, ‘Yeah, we’ve been wanting to do something like this, too!’”  The original music that has become the “Southside sound” doesn’t fit neatly into any one genre. It’s new, yet familiar; a blend of rock, country, folk, blues, pop, and alternative. But listening, you hear the south side of Chicago.

Come hear this sound for yourself on Saturday, August 10, and sample some of the best live music and original art that Chicago’s south side has to offer!