However, the Mt. Greenwood native’s second goal came with a little more urgency and a lot more importance.

Pape knocked in a deflection late in the first half as Br. Rice continued its impressive start to the season with an exciting 2-0 road win over rival Marist on Sept. 7 in a playoff-like atmosphere.

“We were all hyped up. We were super ready for this,” Pape said. “This was great. We really had the momentum pushing for us at the end of the first half. It’s a nice feeling scoring in my first Pulaski Cup. It means a lot.”

Pape and star junior Jack Finnegan scored a goal each for the Crusaders with senior Pat McAuliffe dominating in net with 12 saves, including 7 in the second half against a fast-charging Marist offense.

“We expected early success, but maybe not this level. It’s been crazy,” Finnegan said. “This win tops it off. It was great to be in the game and not just be in it, but win it.”

In a back-and-forth first half, the Crusaders finally broke through. Off a Henry Barsch free kick, Finnegan went up for a header, but Marist goalie John Kennedy made a crazy diving save to his right.

Off the deflection, Pape knocked in the score at the near post with a point-blank shot.

Working with the lead, McAuliffe stood on his head in the second half, stopping one RedHawks shot after another to preserve the lead.

The senior goalie skied for several saves off headers from Marist senior Patrick Clancy on corner and free kicks.

“It was tough, definitely a challenge,” McAuliffe said. “I try and catch my breath. The momentum, the confidence, when it’s there, you feel like you can make certain saves and even ones you don’t think you can get. You can be lucky, but it’s easy when the confidence is there.”

Finnegan emphatically closed things out with a pretty shot from 15 yards out on the left to the far post with 10 seconds left in the game.

advertisement
“We’re a solid team. It was a fantastic 80 minutes,” Finnegan said. “Getting one in, even with 10 seconds left, it’s still the best feeling.”

For first-year Br. Rice Coach Matt Prunckle, a 2004 alumnus, the win was especially memorable as the Crusaders ride the momentum of their early success.

“The rivalry is huge enough no matter the sport. It means something to the kids,” Prunckle said. “It helps the boys buy in more. They bought in, and we got a big result today.”

Clancy and junior Joey Shannon led the offensive attack for Marist in the second half, but the RedHawks were unable to bury a shot.

Marist and Br. Rice honored First Responders in a halftime ceremony that featured a tribute to those police officers and firefighters who died in the 9/11 attacks.

The two programs raised money with a split the pot, donations and concessions at the game with funds going to the 100 Club of Chicago, an organization that provides for the families of first responders who have lost their lives in the line of duty. 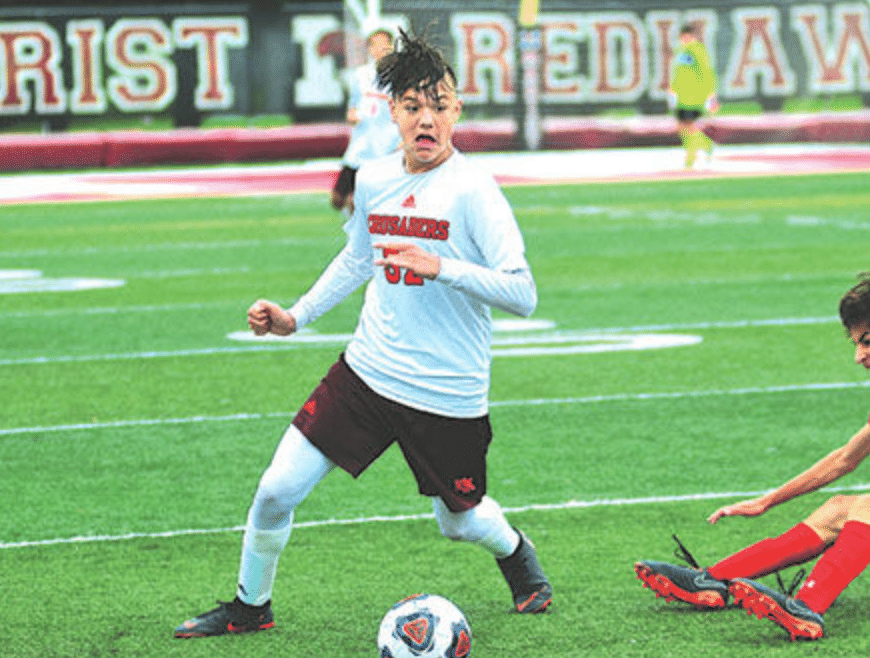