A year ago, Br. Rice linebacker Joe Fitzgerald walked off the field after a Week-9 loss at Loyola Academy.

It was the end of a miserable 2-7 season that was riddled with injuries, but for Fitzgerald and the Crusaders, it was the beginning of a dominant turnaround.

It was the Crusaders’ first Blue title since 2014.

“Every day since last year was our standard. Our practices, in the weight room, we saw something different,” Fitzgerald said. “You saw the competition. The first 9-0 team in school history, this means everything, especially playing a team like Montini.”

With their perfect regular season, Br. Rice edged out Lincoln-Way East for the No.-1 seed in the Class 8A bracket. The Crusaders will host Zion-Benton (5-4) Oct. 27, at 6 p.m., in a first-round game.

Gaining a reputation in recent years as a team with a high-flying offense and a defense prone to giving up big yardage, the Crusaders continued to flip the script; Fitzgerald and a quick, tough and ball-hawking defense posted the team’s fourth shutout of the 2018 season.

“We’re a bunch of junkyard dogs. We’re a bunch of blue-collar kids,” said Fitzgerald, a St. John Fisher grad. “We know nothing is going to be given to us. If we want to play for a state championship, we know we have to earn everything. We’ll rally to the ball, and we’ll give it to you every play.”

A stingy Br. Rice defense allowed just 103 yards of offense, 41 of those coming in the third quarter on a long Deontay Bell run. Jayshon Means added an interception for the Crusaders.

With the defense holding down the Broncos, Br. Rice quarterback John Bean and running back Jessi Plunkett went to work.

Scoreless on the team’s first five possessions, Bean broke through out of nowhere for a 39-yard touchdown strike on a fourth-and-1 play in the second quarter

A Tim Desmond fumble recovery helped set up the next score, a Bean to Dylan Summers 9-yard TD that gave Br. Rice a 14-0 halftime advantage. But, it was less offense than the Crusaders had anticipated.

“Montini is a great team. When it comes down to two good teams playing, that’s what’s going to happen early,” Bean said. “Our offensive line made the right blocks, and I was able to follow them. We like to play old-school football, and that’s all about running it down throats. We’ve brought that back, and we’re happy to do it.”

Bean finished with a monster day, rushing for 135 yards and 3 touchdowns and passing for 101 yards and a touchdown. Plunkett was a force out of the backfield, carrying the ball 25 times for 109 yards.

Br. Rice Coach Brian Badke said the 2017 season is way back in the rearview mirror.

“I’m sick of hearing about 2-7. I was sick and tired of it last year. We move forward,” Badke said. These guys used it as motivation. They put the work in and did exactly what they needed to do to get to this point.” 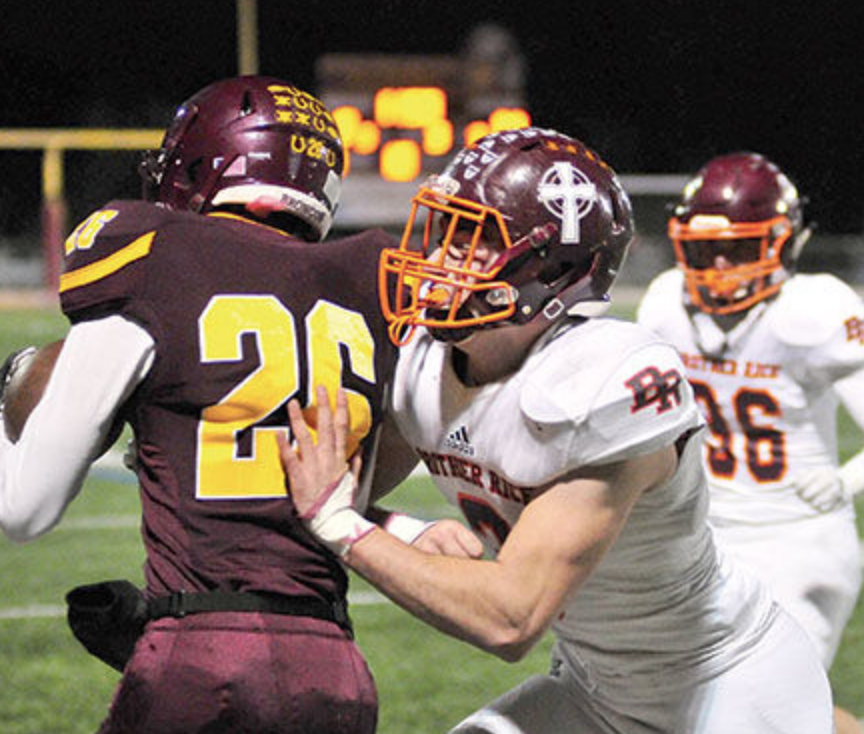