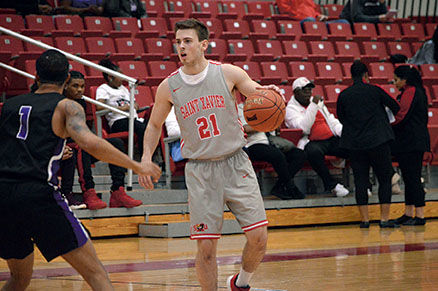 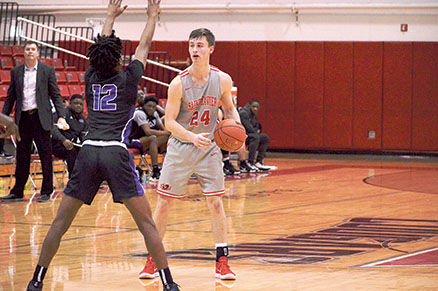 The conversation drifted from one topic to the next, eventually coming around to the fact that neither Niego nor Shepski was happy with his collegiate situation.

Then, at almost the same time, the two Br. Rice graduates from the Class of 2017 blurted out the same thought. What if they reunited at St. Xavier University (SXU)?

What a difference a year makes.

Niego and Shepski transferred to SXU and are playing key roles in the rotation for the Cougars.

“We kind of accidentally both said we’d be at St. Xavier next year. We have a witness that it just came up,” Niego said with a laugh. “We hadn’t planned it, but it’s crazy how it’s worked out. It’s awesome playing together again.”

Playing in 12 games and starting 10 for SXU, Niego is averaging 10.2 points, 4.1 rebounds and 2.5 steals. Transferring from Bemidji State University in Minnesota, Shepski has played in all 14 of SXU’s games, starting 10. A 6’0” guard, the Lockport native averages 8.4 points and leads the team with 26 three-pointers.

Shepski transferred to SXU at the semester a year ago.

“I wanted to get away from home, experience new things, but it was only once I went far away that I realized how special the South Side is and how much the area means to me,” Shepski said. “It’s awesome playing with Josh. I love hooping with him, and I look forward to working with him this year and the next two seasons.”

During his freshman season at Lewis, Niego saw his year cut short by an injury last January, but that was only the start for the 6’4” guard.

After undergoing surgery to fix a Jones fracture in his left foot, Niego developed sciatica in his left leg, a condition that radiates pain along the sciatic nerve in the lower back and legs.

An expected quick recovery turned into several months, with Niego only returning to the court in September. Since then, he’s been building strength in his leg and foot and getting back in game shape.

“My leg was skinnier than my arms. I had to build that back up,” Niego said. “Once you’re healthy, you’re obviously more comfortable in your game and able to play better.”

Getting stronger each day, Niego is starting to see the results in his play. In a win over Robert Morris-Chicago on Dec. 15, Niego (Morgan Park, St. Cajetan) went off for a career-high 21 points, and he added 7 assists and 7 rebounds.

Finding his place at the collegiate level, Niego couldn’t be happier.

“It’s one of the best choices I’ve ever made,” Niego said. “I’m a South Side kid, South Side made. I love playing in the neighborhood. My whole family can come out and see me play.”

Seeing inconsistent minutes on the court before transferring to SXU, Shepski and Niego have been thrown into the fire as they adjust to a higher level of play.

“It’s a whole different ballgame. Playing at the Division II level, it prepares you,” Shepski said. “The strength, the athleticism, the speed, it’s enhanced. It’s college basketball, so you get used to the strength and speed.”

While SXU has struggled at times with a 5-9 record through Dec. 28, the high-scoring Cougars have plenty of time to turn things around in the second half of the season.

For Niego and Shepski, who are also roommates, they’re not trying to relive the past—they’re looking to the future.

“We had a lot of special memories at Br. Rice, but we know that time is over,” Niego said. “Now we’re making new memories here, and it’s been a lot of fun. It’s never a dull moment.”