A consistent sniper from long range, Br. Rice senior Jimmy Gavin is one of the best 3-point shooters around.

But in a back-and-forth contest at Mt. Carmel, Gavin showed he’s not just a long-range bomber.

Corralling a deep rebound and fighting his way through traffic, Gavin went coast to coast, hanging in the air for an athletic fast-break layup that helped seal a 65-61 comeback win on Jan. 4 in a Chicago Catholic League crossover.

“It was different. I’m used to sitting on the 3-point line waiting to shoot,” Gavin said with a smile. “There’s a hand in my face if I go up, someone to block me, so it was tough.”

For the Crusaders, big efforts from Gavin and Kennedy were a necessity after a sluggish start to the third quarter. Mt. Carmel came out firing, connecting on 3 3-pointers as part of a 13-2 run that blew open a halftime tie at 32.

Kennedy had an answer.

“We were in big trouble,” Kennedy said. “When a team is raining 3s like that, it drains the life from the other team. In a timeout, I told my teammates to just shoot. If you miss, shoot again and keep shooting. We started hitting some shots and came out with the win.”

Kennedy scored on athletic slash through the defense and then found Gavin (Evergreen Park, Most Holy Redeemer) in the corner and at the top of the key for back-to-back 3-point swishes.

“Jimmy always comes through in the clutch for us. He delivered tonight,” Kennedy said. “He knows I’m looking for him. Every time I drive to the hole, I locate him on the court. He’s our best shooter, so when he gets the ball, there’s a good chance it’s going in.”

A Colin Campbell 3 put Br. Rice up 56-54 in the fourth with Anthony Arquilla scoring on a hard cut off a Campbell inbounds pass. A Kennedy layup extended the lead to 60-54 with 3:31 remaining.

Gavin sealed the comeback win with his fast-break layup after Mt. Carmel cut the score to 60-59.

Gavin admitted the layup wasn’t his first thought upon grabbing the rebound.

“Get it to Marquise, and go from there,” Gavin said.

Gavin is making the most of his chances in the starting lineup after not seeing the court much as a junior. He’s averaging just under 11 points a game this year.

“I knew it was my senior year, and I had to make the most of it,” Gavin said. “I was going to the gym shooting as many 3s as I could. I had to get ready, and so far, I’m doing what I wanted to do.”

Watching his team race back from an 11-point deficit in the second half, Br. Rice Coach Bobby Frasor said his team’s energy was outstanding.

“What I’ve been pushing for is their fight and how much they want to win. That showed me a lot right there,” Frasor said. “Hopefully we can build and grow from that. I’m proud of the guys for clawing and scrapping their way back.”

Mt. Carmel dropped to 12-5, 4-2. Senior guard Josh Redic powered the Caravan with 24 points with Liam McDonagh (14 points) and Will Mendez (9 points) chipping in.

Redic said the Caravan blew a chance to close the game out early in the second half.

“We got complacent,” Redic said. “We looked at the lead, and we didn’t keep our foot on their neck. We should have kept going, kept playing hard like we were down. We’ve got to fix that.”

“I’ve never been on a team like this with our chemistry,” Redic said. “We all love each other, and we have each other’s backs. That’s something that—win, lose or draw—we’ll never change.” 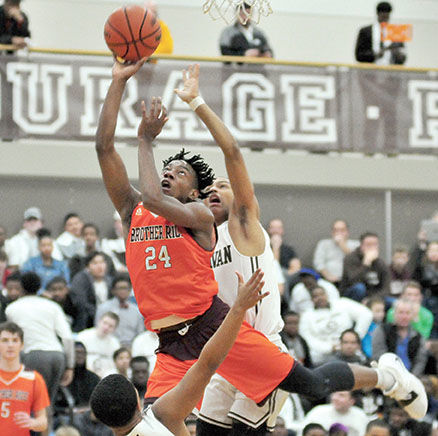