Connecting on 6 3-pointers through three quarters, Br. Rice junior forward Deandre Hagan made his impact felt in the annual Battle of Pulaski against rival Marist.

In working to hold off a fast-charging RedHawks squad, Hagan’s presence was especially felt in the post.

Powering his way to an offensive putback and converting a 3-point play late, Hagan helped stem the tide for host Br. Rice in an exciting 76-72 victory on Jan. 22 over Marist.

Hagan finished with 21 points and 5 rebounds.

“Our coaches emphasize rebounding and putbacks on offensive rebounds,” the 6’3” Hagan said. “I’m one of those guys who can go get the ball. I saw an opportunity. I knew it was a big game and had to help my team. I knew I had to make those shots.”

Br. Rice led by as many as 11 points in the fourth only to see senior Dorion Pendleton and the RedHawks race back into the game. Pendleton’s free throws tied the game at 61 with 3:42 remaining.

After back-and-forth possessions, Hagan delivered a huge rebound on a Marquise Kennedy miss inside. Strong-arming his way through the defense, Hagan put in the layup and drilled the free throw.

For Br. Rice Coach Bobby Frasor, it was a play to remember.

“To go back up, get fouled and finish, that was my favorite play,” Frasor said. “I was flexing over here on the sideline. That brought the energy. That’s a big-time play. We’re excited to see Deandre mature and keep growing in that role.”

Hagan’s 3-point prowess kept the Crusaders in a high-scoring first half as he connected on 5 3-pointers. He finished with 6.

Playing Robin to Kennedy’s Batman, Hagan was ready to contribute in the always-energetic rivalry.

“We’ve got a big-time player in Marquise. We know he’ll have the ball a lot, maybe 80 percent of the time,” Hagan said. “If he misses, I’m hoping to put it in, rebound, do whatever I need to do to help. Any rivalry game is going to be tough. If they punch, we punch back and keep fighting.”

A Loyola University-Chicago recruit, Kennedy delivered another monster all-around game for the Crusaders. He finished with 28 points, 7 rebounds, 4 assists, 3 steals and 2 blocks. Kennedy connected on 14 of 17 free throws.

The 6-foot guard scored 7 points in the third, including a 5-0 burst that featured an athletic steal and two-handed fast-break dunk.

With his teammates bombing away around him, Kennedy went to work. 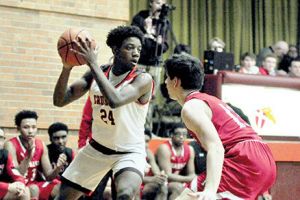 “That’s the best Deandre has ever shot. It was amazing,” Kennedy said. “When the team’s hitting, it’s a huge weight off my shoulders. The defense is less focused on me, so that’s when I can attack and create opportunities.”

Kennedy was thrilled by the atmosphere as Br. Rice regained bragging rights and takes a 16-15 series lead over Marist.

“Marist was wired. The key was our crowd and their energy,” Kennedy said. “It’s a game of runs, but both sides were punching hard. We came back and stuck it out.” 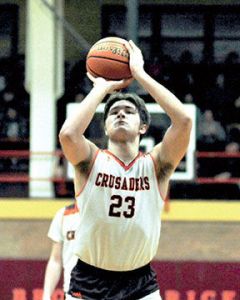 All photos are credited to The Beverly Review