Courtesy of a 1-3 record through the first two weeks of January, the Br. Rice hockey team found itself in chase mode heading into the final week of the season.

With four games in six days, the Crusaders needed a hot finish, and they got it.

Behind a hat trick from senior Matthew Moro and the go-ahead goal from sophomore Luke Lawrence, Br. Rice prevailed in a high-scoring affair, taking down Mt. Carmel 6-5 on Jan. 23 at Southwest Ice Arena in a Chicago Catholic Hockey League showdown.

“This win means a lot. We’ve been working hard but came up a bit short at the beginning of the year,” Lawrence said. “We knew Mt. Carmel was going to come at us, so we needed to bring our A-game. We came out on top in this one.”

Br. Rice (13 points) came into the game 2 points behind Mt. Carmel (15 points) in the standings for the eighth and final spot in the upcoming Kennedy Cup playoffs.

Clinching the eight-seed in the upcoming Kennedy Cup playoffs, Br. Rice fell to St. Viator on Jan. 24 but regrouped with a 6-2 win on Jan. 27.

The Crusaders wrapped up the regular season on Jan. 28 against Carmel of Mundelein, after press time.

Looking to stay in the league playoffs, Mt. Carmel lost to Providence Catholic and Notre Dame, just missing out on qualifying for a second straight year.

Br. Rice lost to Notre Dame, Marmion and Providence Catholic by a combined 4 goals in early January. So, in a back-and-forth matchup with the Caravan, Moro knew the Crusaders needed to be steady.

“We wanted to stay humble and keep working. We need to play all 3 periods hard,” Moro said. “It takes a lot of effort from the whole team with good defense, good goalie and a great offense. It’s a team game. Everyone needs to play well.”

In recording his second hat trick of the season, Moro tied the game at 1 late in the first period on a power play. After Lawrence put the Crusaders up 3-2 with a buzzer-beating shot to close the second, Moro tallied again just seconds into the third.

The senior forward skated wide on the right and ripped a shot past Mt. Carmel goalkeeper Jacob Cronin.

“We needed a big win, so I came out playing hard,” Moro said. “Our coaches always say take it wide. I threw it on the net. I snuck it in—doesn’t matter how you score it.”

In a 2-2 game as the final seconds wound down in the second period, Lawrence found himself in the right place at the right time.

His goal put Br. Rice up 3-2 as the buzzer sounded.

“I was floating in front of the net, and Ethan McCarthy gave me a nice little pass,” Lawrence said. “My stick was down on the ice, so I slid it right through the goalie’s 5-hole.”

Through the ups and downs of tough losses and gutsy wins, Br. Rice Coach Paul Manning said his team stays together.

“We’ve been chasing, but we’ve been playing well through this stretch,” Manning said. “There’s no doubt in my mind that this group of kids can continue with what they’re doing right now. Our big boys showed tonight.”

“It was tough. Falling behind, the kids felt the pressure a little bit,” said Mt. Carmel Coach Brian Black. “The pressure came off, and we started playing and finished strong.”

With his team facing several must-win games during the final week, Black addressed the Caravan in matter-of-fact fashion: last year, the team missed the playoffs by a point.

“We try and stress that every game has 2 points on the line,” Black said. “It’s not so much big picture, but break it down game by game without looking too far ahead. Certain games you expect 2 points, others you steal 2.” 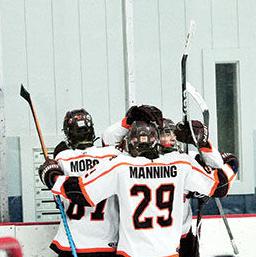