Last Wednesday, Brother Rice hosted their third annual Turkey Bowl. With 28 teams ready to compete for first place, it was destined to be a good time.

Mikey Santos said, “You know we just had more pride and passion. Everyone doubted us, […]

The Standard: The Future Crusaders

The Brother Rice Open House was a success! It is one of the most significant events during the school year. Twice a year Brother Rice welcomes hundreds of grammar school students. This is our first mask-free open house for the first time in two years.

During the open house, potential students and their families can see what Brother Rice has to offer. National Honor Society members give a variety of information about clubs or sports and give tours around the school.

This year we showed our recently renovated broadcasting room, football field, and weight room.  Being a National Honor Society […] 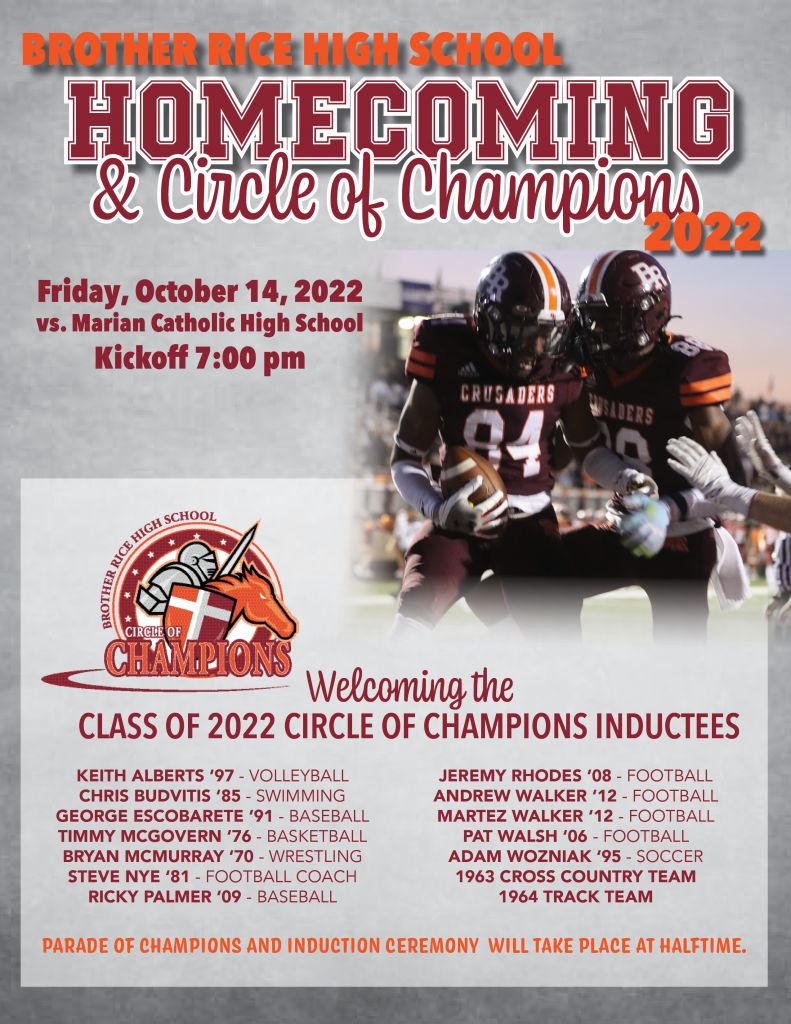 The Circle of Champions, the Brother Rice athletic hall of fame, is excited to welcome its twelfth class of dedicated coaches and athletes to this prestigious fraternity. The Class of 2022 will be inducted at halftime of the Friday, October 14, Homecoming game against Marian Catholic. The varsity game kicks off at 7:00 p.m. with the introductions of the inductees during halftime festivities. Please join us in “welcoming home” our new class of inductees on this special Homecoming night.

Brother Rice High School has announced Danny Lawler as the new head coach of its Lacrosse program. No stranger to the lacrosse scene on the southside, Lawler played at St. Rita before attending Bendictine University, where he played all four years, two as captain. As a defenseman, he helped the Eagles win the NACC conference championship in 2021. Lawler has also coached many different club programs, including 1223, True Lacrosse, and East Ave. After graduating from Benedictine, he helped coach at the university for a semester, and he currently coaches at Four Star Lacrosse and Beverly Lacrosse.

“I want Brother Rice to be where kids want to come play lacrosse on the southside,” […]

Brother Rice High School students excelled in College Board assessments and school work to earn these awards, which colleges use to identify academically competitive underrepresented students

Brother Rice High School (Chicago) Director of Athletics Michael Fahey announced that, effective immediately, Conte Stamas will helm the basketball program as the new Varsity Head Coach. With 22 years of head coaching experience and fifteen years at the collegiate level, Stamas looks to continue the recent success of a Crusader team that went 24-7 last season and is returning many of their players.

Stamas will serve as only the sixth Varsity Basketball Head Coach in Brother Rice’s storied history.

“I’m extremely excited,” Stamas says. “I can’t wait to get started, to get to know the players, and to learn […]

On a recent summer morning, Brother Rice Strength and Conditioning Coach Michael Cano (Class of ’03) could be witnessed explaining a proper lifting technique to a gathered crowd of captivated student-athletes in the newly renovated weight room at Brother Rice High School.  Twenty years ago, Cano patrolled the gridiron as a captain of the Brother Rice Crusader football team; nowadays, besides running his own business and helping parent his three young children, Cano oversees a year-round training regimen for student-athletes, no doubt enhanced by the improved accommodations.

Bobby Frasor Is Inducted Into the Catholic League Hall of Fame

Congratulations to Bobby Frasor ’05 on being inducted into the Chicago Catholic League Hall of Fame!

The Blue Island native attended St. Benedict school before attending Brother Rice High School. While at Brother Rice, Frasor played three years of varsity basketball, winning two sectional championships and one Super-Sectional. Frasor began to stand out as a junior when he averaged twelve points and five assists on a team that finished the season 26–2. The following year, Frasor’s senior season, he averaged 21 points, five rebounds, and seven assists and was named the Chicago Catholic League Player of the Year. In his total time […]

The Crusader Water Polo Team competed in a tournament in Fremd, Illinois over the past couple of days. The Crusaders posted a record of 2-6 with the two wins coming in games against the Lincoln Way East Griffins and the Prospect Knights. The losses came in games against Conat, Glenbrook North, Deerfield, Loyola Academy, Naperville Central, and Palatine.

As the water polo regular season nears to an end All-Sectional senior Jack Byrne said, “I was given the opportunity to take younger players under my wing. I always try to help them in any way possible.”