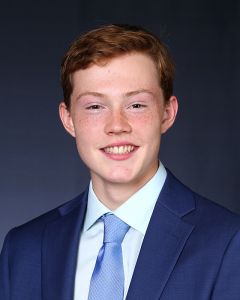 According to the United States Military Academy, the West Point mission is “to educate, train, and inspire the Corps of Cadets so that each graduate is a commissioned leader of character committed to the values of Duty, Honor, Country and prepared for a career of professional excellence and service to the nation as an officer in the United States Army.”

From an early age, Alex was enamored with the United States military and its history, but while his aspirations to serve his country began in grade school, it was during his junior year at Brother Rice that he realized that West Point–with its 10% acceptance rate–was a feasible option to meet his career goals.  After all, Alex’s résumé certainly looked impressive: He had excelled in academics, maintaining a 4.0 GPA, scoring a 31 on his ACT, and earning college credit and leadership experience through various AP and college class summer offerings; he was in great physical shape, conditioning and competing as a key member of the Brother Rice Cross Country and Track & Field teams, earning all-Catholic League Scholar-Athlete accolades; he had involved himself in other extracurricular activities such as Kairos and the Brother Rice Scholastic Bowl Team, making the varsity team every year and eventually emerging as captain; and he had volunteered tirelessly, counting the Field Museum, the Bridge Summer Camp, and the Chicago Food Bank, among other entities, as regular commitments.  On top of this, Alex also found time to work as a caddy at Beverly Country Club, as a laborer for his father’s electrical company, and even as a Cook County Election Judge.  After a winter visit to the United States Military Academy, where he witnessed the “wildly competent and utterly selfless” U.S. Corps of Cadets, faculty, and staff, Alex was convinced that West Point was the place for him.

So began the arduous application process. “There were loads of forms, essays, letters of recommendation, interviews, and tests to be completed,” Alex stated, “I simply could not have completed the application, let alone get into West Point, without the support of Brother Rice teachers and fellow students. Over several months, I received help and encouragement from countless people, especially Mrs. Rundh, Mr. Creed, Coach Gleeson, Ms. Jantz, Ms. Donnelly, Mr. Dolan, Mr. Swynenburg, and Brother Hayes.  Looking around in class day after day and seeing the example put forth by my classmates, I felt motivated to get through whatever needed to be done. There’s a resounding culture of determination held by both students and staff at Brother Rice, which couldn’t be more inspiring during a long, detailed application process.”

Alex’s discipline, dedication, and determination paid off.  “I logged into my West Point Application portal on a recent Saturday morning to find the news that I had been admitted. I was not expecting any news at that time so it came as quite a shock. For a day or two, it just didn’t feel real. My parents and my sister were both thrilled and supportive from the moment I told them.”  Acceptance earns free tuition, room and board, medical and dental benefits, and monthly salary. The experience also opens doors for graduate school opportunities and employment after graduation. In return, cadets are required to serve for five years in the Army on Active Duty as officers. Immediately after West Point, cadets are commissioned as 2nd Lieutenants to lead enlisted men and women in the Army.

“Acceptance to West Point has solidified my aspirations to commit to a lifetime of work in National Defense and Intelligence,” Alex continued, “I plan to major in East Asian Regional Studies to gain a better understanding of the Chinese military and of the steps that America can take to better uphold and promote peace and democracy in the region. I’m very excited to train, study, and serve with young men and women who are called to serve our country.”

The current pandemic has thrown a wrench in Alex’s, as well as all current seniors’, original vision of the way he’d finish high school–the rituals, the prom, the ceremonies, the time with friends–but Alex’s optimism still shines through: “Despite the current exterior circumstances, it’s been fantastic to have our family together during the last few weeks. It was a joy to live out the experience with them–one that I will take with me to West Point as motivation to get through challenging times!”

The United States Military Academy–and America in general–is blessed to have Alex MacFarlane, who certainly exhibits what it means to “be exceptional.”