The Mission of Brother Rice

We, the family of Brother Rice High School, are a diverse, Catholic Christian community, committed to preparing young men for college and for the process of life-long learning. We educate young men to act manfully in Christ Jesus and to deal wisely with their world in the tradition of the Christian Brothers and the charism of Blessed Edmund Ignatius Rice.

Our Promise to You

Brother Rice High School presents its profile of those competencies and traits that each student will ideally possess at the time of his graduation. These are the goals for which Brother Rice strives, while acknowledging that all students may not fully achieve all the levels of growth described herein during their four years of high school. 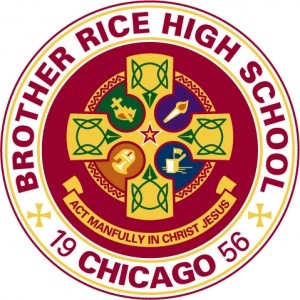 The entire field is enclosed within a double circle which is symbolic of the eternity of God. Placed between the outer and inner circles are the name of the school, the city in which it is located, and the year the school came into existence. Prominent within the circles is a Celtic cross with Celtic interlacing, symbolic of the origin of the Irish Christian Brothers, the founding religious order of the school.

On the field loosely embraced by the arms of the cross will be seen, on the top right, a torch which symbolizes the light of learning. On the top left can be seen a cross encircled by a crown, illustrating the belief that no one can hope to wear a crown in eternity who has not carried the cross on earth in imitation of the Savior. On the lower left may be seen a crusader helmet, so familiar to students of medieval times. (Brother Rice has named its teams the Crusaders after the great knights of Christian antiquity.) On the lower right may be seen a faint image of the once-important Fort Dearborn, symbolic of the great city of Chicago in which the school is located.

The star signifies that “those who instruct others until justice shall shine as stars for all eternity.” (Daniel 12:3)

Finally, beneath the Cross are seen the words “Viriliter in Christo Jesu,” Latin for “Act Manfully in Christ Jesus.” These words form the motto of Brother Rice High School.