The Brother Rice soccer team, coached by Matt Prunckle and Kevin MacAlinden, had a season to remember. The Crusaders had been struggling to find success since star player Jack Finnegan graduated.

However, this year was different; the Crusaders brought in a very strong freshman class. The Crusaders starting lineup for their first game of the season consisted of 6 freshmen, 1 sophomore, 2 juniors, and 2 seniors. The kicking Crusaders started off the season hot with a record of 5-2, making it clear that Brother Rice was going to be a competitor this season.

Things took a turn for the worst when starting goalkeeper, Oscar Cerritos, went down with an injury and missed serious time. The Crusaders struggled to compete in games without such a defensive presence in the goal. Their record plummeted as it dropped to under .500 for the first time all season.

Playoffs were right around the corner, and the team needed an answer. Coach Prunckle decided to pull up two sophomores, Robbie Rutledge and Andy Andrade. These boys instantly added a spark to the Crusader offense by each scoring a goal within their first two games. Goalkeeper Oscar Cerritos returned with 2 games remaining in the regular season and was back like he never left, putting up a shutout in both games.

“It is great to be back in the goal,” said senior goalie Oscar Cerritos. They finished the season with a record of 9-12-2.

The Crusaders entered the playoffs as the 2 seed in their regional, and would take on the 3 seed, Crete Monee.

After scoring 3 goals in the first fifteen minutes of the game, the Crusaders soundly defeated Crete Monee 4-0. In the regional final, they would take on a very tough opponent, the #1 seed Chicago Washington. After an intense 80 minutes, the game went into overtime. After conceding an early goal in overtime, the Crusaders lost 2-0.

The youthful Crusader team will be back and ready to compete next year. They are destined to make a run in the playoffs and make a name for themselves. 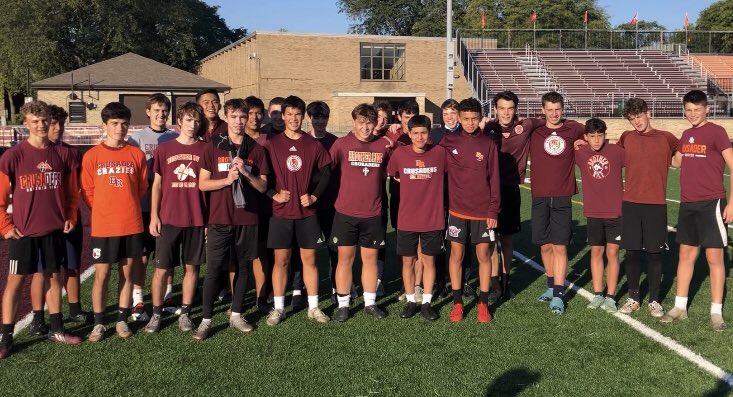