The Brother Rice Crusaders and the St. Rita Mustangs faced off for the second time this year. With the Crusaders being 1-0 against them this season, Brother Rice knew the Mustangs were going to come out for revenge game 2.

The game was held on January 30 at Oak Lawn Ice Arena. The Chicago Blackhawks were sponsoring the game for the rival series between the Crusaders and Mustangs. The National Anthem singer for the Blackhawks Jim Cornelison came to Oak Lawn to sing the anthem before the game.

The Crusaders defeated the Mustangs with an outstanding 5-0 victory. Brother Rice had 32 shots on net while St. Rita had 17. Goals were scored by senior Blake Mayer with a hat trick, and sophomore Jack Keaty with 2.

Keaty said, “This win was huge and we got lots of momentum going into the playoffs.”

Matt Cunningham had an outstanding night with a shutout to end the regular season. Cunningham said, “It feels great to shutout a team like St. Rita.”

The Crusaders move on to play the St. Ignatius Wolfpack in the first round of the Kennedy Cup playoffs. 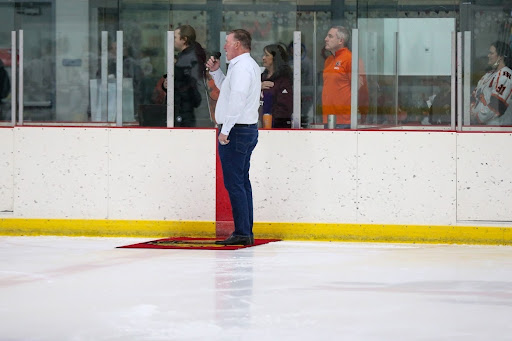