On Friday, Oct. 10, the cross-country team hosted its first ever Senior Night.  It was their second race on their new home course and the weather conditions were perfect.  Parents, coaches and runners alike experienced an event to remember.

After the gun went off to start the girls’ varsity race, the Brother Rice seniors and their parents walked out to the football field to begin the Senior Night Ceremony.  Each Crusader brought an orange rose out to their mother and was congratulated by Mr. Alberts, Mr. Donahue, and Mr. Prunty.

Senior Eddie Burke said that he really appreciated the event because it was nice to be recognized for all of the hard work and dedication that he has put into the program over the past four years.

Senior Kevin Lynch said, “The senior night experience was really cool for me. One thing that stuck out to me was how excited the seniors were for it because we have worked really hard, so getting some recognition was awesome.”

Once the ceremony ended, the parents went back to the stands and seniors Kevin Lynch, Kyle Gallagher, Adrian Campos and Edgar Garcia joined their teammates at the starting line before the junior varsity race began.

Joey Bowes put on a show in this race by setting three personal records in the one mile, two mile, and three mile and winning the race by a comfortable nine seconds. Kevin Lynch and Jack Gorman ran impressive races as well and came in at second and third place.

After the race, Joey said that he did not believe he was capable of running as fast as he did.  The goal he had set for himself was to run under 19 minutes.  He was surprised when he took the lead, and his position motivated him to run harder to stay in first place.

At 6:15 p.m. the varsity race began.  The main event was left this late on purpose because this race was officially known as the “Rice Twilight Invite.”

Eddie Burke and Mikey Corcoran went through the first mile together in a shocking five minutes and seven seconds.  Eddie pulled ahead of Mikey by the end of the second mile, but Mikey still managed to set his personal record for two miles in this race.  This impressive feat comes right after his first place finish and personal record for three miles last week.

After fifteen minutes and fifty-one seconds, Eddie Burke came down the homestretch of the track under the lights.  He set a personal record and won the race.  Mikey Corcoran came in soon after Burke to earn himself a third place finish.

Eddie Burke said that the victory on Senior Night felt special because it meant a lot to him to be recognized for his accomplishments in front of family and friends after COVID-19 limited spectator attendance for most of the season.

Although COVID-19 has made this cross-country season very different from years past, the coaches have worked hard to adapt and make the most of what they had.  Everyone seemed to enjoy the first ever Senior Night, and maybe this event can be kept in the schedule even when restrictions are lifted. 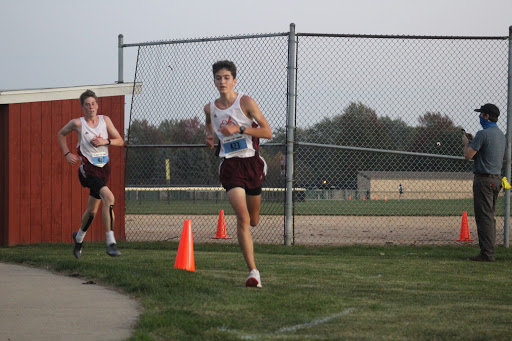 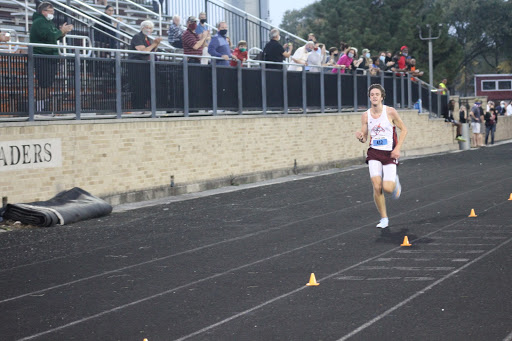