The Standard: Crusaders Come Up Short In Another Shootout

Eight touchdowns and 650+ total yards of offense was not enough for the Crusaders.

On Friday, Oct. 8, two of the top three teams in the state of Illinois crossed paths at 99th and Pulaski. It definitely turned out to be a good one.

The game started off quickly for the Crusaders, as they scored in 25 seconds. Quarterback Jack Lausch, exploded out of the line of scrimmage for a long gain on the second play of the game, setting up running back Aaron Vaugn to punch it in.

The Crusaders then surprised everyone at Tom Mitchell Field kicking an onside kick and recovering it.

Lausch would reach the end zone this time, creating a 14-0 lead with 8:24 left in the first quarter.

Senior offensive lineman Carter McAlilly stressed how big it was to get off to a hot start: ¨We knew it was going to be an offensive shootout and if we kept the lead from the very beginning there was no way we lose.¨

Finally getting the ball, Joliet Catholic running back Jordan Anderson got his first of six touchdowns.

Both teams reached the end zone one more time before the end of the first quarter.

For only one of two times the whole night, the Crusader offense was forced to punt.

Aidan Voss, Joliet Catholic quarterback, scored his first and only rushing touchdown of the night to tie it up at 21.

Aaron Vaughn, Crusader running back, took it 55 yards to the endzone on the second play of the drive. However, Joliet Catholic answered back with another long run of their own.

Next possession, senior receiver Da´Kobie Wordlaw ran a terrific corner route to create space in the endzone for Jack Lausch to find him for six. Jordan Anderson then scored on his second 30+ yard touchdown of the game, tying the game at 35 heading into halftime.

The third quarter was rough for the Crusaders, as they were forced to punt and fumbled. The game looked grim for them as they were down 14 to an offense that literally could not be stopped.

However, captain Henry Boyer knew a Catholic League game is never over. ¨We wanted to control what we could control and we were not gonna stop,” Henry said.

Joliet Catholic missed a field goal with 8 minutes left in the fourth quarter giving the ball back to the lethal Crusader offense.

On the 5-yard line, Lausch dumped it off to Henry in the endzone to bring them back in the game with seven minutes remaining. Given the ball with 2:27 remaining, Jack Lausch and Henry Boyer stepped up as leaders of the team, with the game on the line, and connect on a 31 yard touchdown. The Crusaders tried their luck again with an onside kick but come up short.

From there on, Joliet Catholic milked the clock, lined up in victory formation, and celebrated their biggest win of the season.

Brother Rice fell to 5-2 on the season with two games remaining in the regular season.

When asked about the Crusaders competitiveness, Coach Borrelli said, “This is the most competitive team I’ve ever been a part of. They go after it during practice and it shows in games. They never give up and always fight, no matter the score.¨ 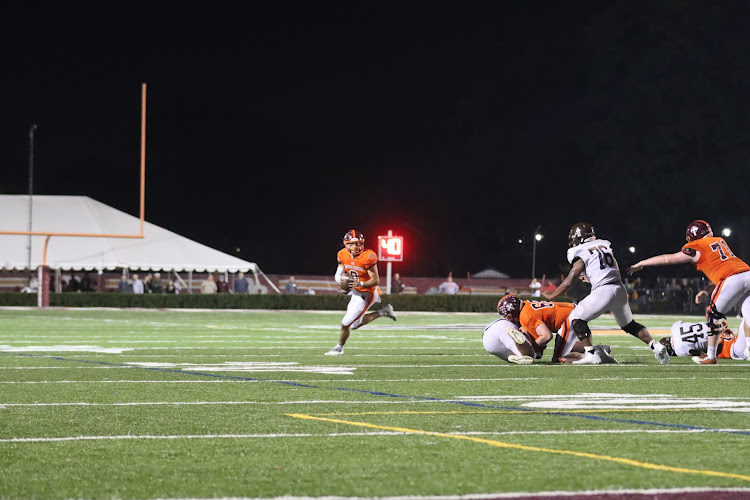