This year has had a rough start with celebrity deaths and the coronavirus pandemic. It seems that Lil Uzi Vert is the only one that is making this year better for the people in the rap community.

After years of delay and drama, “Eternal Atake” dropped on Friday, March 6. The excitement of so many people was surreal to see from one album. Senior Declan Docherty said, “I was driving around blasting “Eternal Atake” in my car and I didn’t go home until I finished the whole album.”

The album consists of 16 songs and two bonus songs. The album has snippets of the Eternal Atake story at the end of every song. The first half of the album represents Uzi’s uptake into space and the second half of the album is Uzi chilling in space.

“Eternal Atake” was finally out to the public, and everybody was satisfied except for Uzi himself. Uzi wanted to release the deluxe to “Eternal Atake” a week after the original album dropped. Dropping a deluxe album a week after the original album is unheard of, but that’s not it. Most deluxe albums add about three songs, but Uzi decided to drop 14 more songs under the sequel name “LUV vs the World 2.” When this deluxe album was announced senior Jack Eastman said, “I hope this lives up to the hype of ‘Luv is Rage 2.’” “Luv is Rage 2” is Uzi’s most popular album and charted at number one on the Billboard 200.

The new 32 song deluxe album is out and is seeing the same attention “Eternal Atake” saw the week before. The deluxe album is full of bangers and features. Senior Connor Bowes said, “My favorite song has to be ‘Bean (Kobe) [feat. Chief Keef]’ because I heard it as an unreleased song and I was really excited to see it on the deluxe album.”

“Eternal Atake” consists of everything anyone could ask for and that’s why it debuted at number one on the Billboard 200. Senior Tom Boyle said, “I’ve only been able to listen to Uzi since “Eternal Atake” came out, it’s going to be the album of the year.”

I put together a pyramid chart of all the “Eternal Atake (Deluxe)” songs to show where I think they rank compared to each other. The album hasn’t been out long, but this is my first opinion of all the songs. 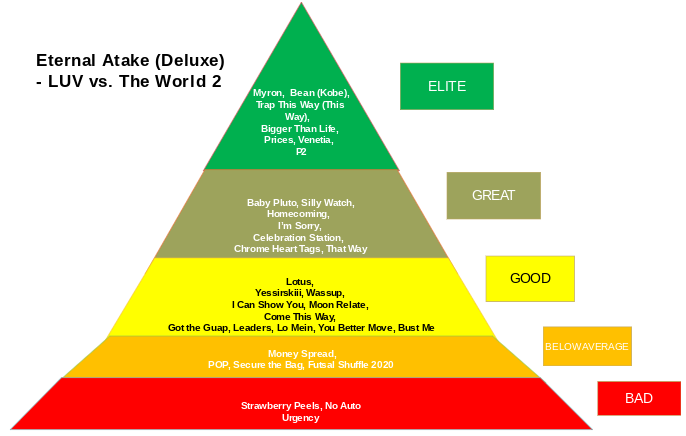