After a stressful junior year, I was excited to see what senior year had in store. There was no more dealing with the ACT and ACT classes, and once I was done “collegeing,” the rest of senior year was going to be easy.

In the fall was football season. Ever since homecoming my freshman year, I have gone to a majority of the games and only missed a couple home games. I made an effort to go out and support our sports teams. Friday night football games were so fun and I wish there were still these games.

As with years past, the season opener was against the school on 115th Street. Our rivals. Week One at home. What’s not to get excited about?!? The Crazies were surely pumped up.

As per usual, it was a good game and both teams had big plays, but Rice prevailed with a score of 20-16. Rice was 1-0 against Marist my senior year.

Looking back, one of my favorite memories during football season would be the game that took two months to decide a winner. Yes. 2 months.

On Aug. 31, 2018, the Crusaders took on the Warriors of Crete-Monee. That night there was a big thunderstorm and the game almost was canceled. Because of the weather, nearly all of the Crusader Crazies had left, but a few of my friends and I stayed.

The game started back up around 10:30 p.m. Despite the slippery bleachers and soaked seats, only a few seniors cheered on their team while leaning on THE RAIL. The game proceeded to be dominated by the Crusaders with a final score of 42-16. However, that final score took another month to determine. The game ended after midnight, so it was Sept. 1, 2018, and technically the game lasted two months. We would joke around, saying that ESPN would have to come around and capture this moment for a 30 for 30 film.

Homecoming was around the corner and it could potentially be the last homecoming dance I would go to, so I wanted to make it a good one.

As part of Student Council, I had to help coordinate the pep rally and fun lunch activities during the week. Being behind it all was really fun and I wish I could go back.

The football game against St. Rita was on Friday and the dance was the next night. That game, at the end of the National Anthem, everyone in the Crazies threw up packets of rice powder. It was rough being in the midst of it all, but it was really cool from the outside. The dance was fun and being in the Crazies was even better.

Next up in big events that happened during my memorable senior year was the state semifinal against the school on 115th and Pulaski. It was the biggest game yet, playing our rivals to punch a ticket to Champaign for the state championship. It doesn’t get bigger than this. As a Crusader Crazy, I was so excited for this game. There was a tailgate beforehand and there was a bombardment of Crazies ready to take on Marist.

That day was very cold and it actually snowed, so the theme of “ski party” was good for everyone.

We all know how the game went. Rice came out victorious once again with a score of 14-3. I vividly remember the announcer said not to rush the field after the game. But it’s Rice. Someone telling a bunch of teenagers not to do something only makes us want to do it more. I was in the front line of students rushing the field and got trampled, and like dominoes, people tripped over me and so on. Rice was 2-0 against Marist.

Next up was state. Our football team not only went undefeated this year, but also freshman and sophomore year. Brother Rice football hadn’t gone down for state in 33 years and they were going down my senior year. This almost sounds too good to be true. The bus ride down to Champaign was filled with nearly the entire Brother Rice student body.

I was dressed as Santa and you may have seen me if you watched from the warmth of your household. As someone in the front row, it was truly an unreal moment. I was surrounded by all my friends cheering on our football team at the biggest stage. Even though Rice wasn’t able to pull out a win against Loyola, I will remember this as a top moment at Rice.

After state were a ton of dances. Fortunately, our sister school Mother McAuley hosted their first homecoming dance and I was lucky enough to be asked to go to it. I remember taking pictures on #10’s green at Ridge Country Club. There were holes on the green everywhere because of the girl’s high heels. This was really funny because when I caddied there the next day, I saw these holes and remembered.

A month or so later was McAuley’s Winter Formal. That dance was fun and made the wait for prom even harder.

Next up was a game against Marist yet again. This time in basketball. Why do we even bother? The game was highly competitive, but we came out victorious and Rice was 3-0 against Marist.

Every year, the Dad’s Club hosts a Mother-Son Dance. I have gone all four years. The dance is fun, as usual, but it is a way to thank my mom for all she has done for me and my family. Plus moms are cool. 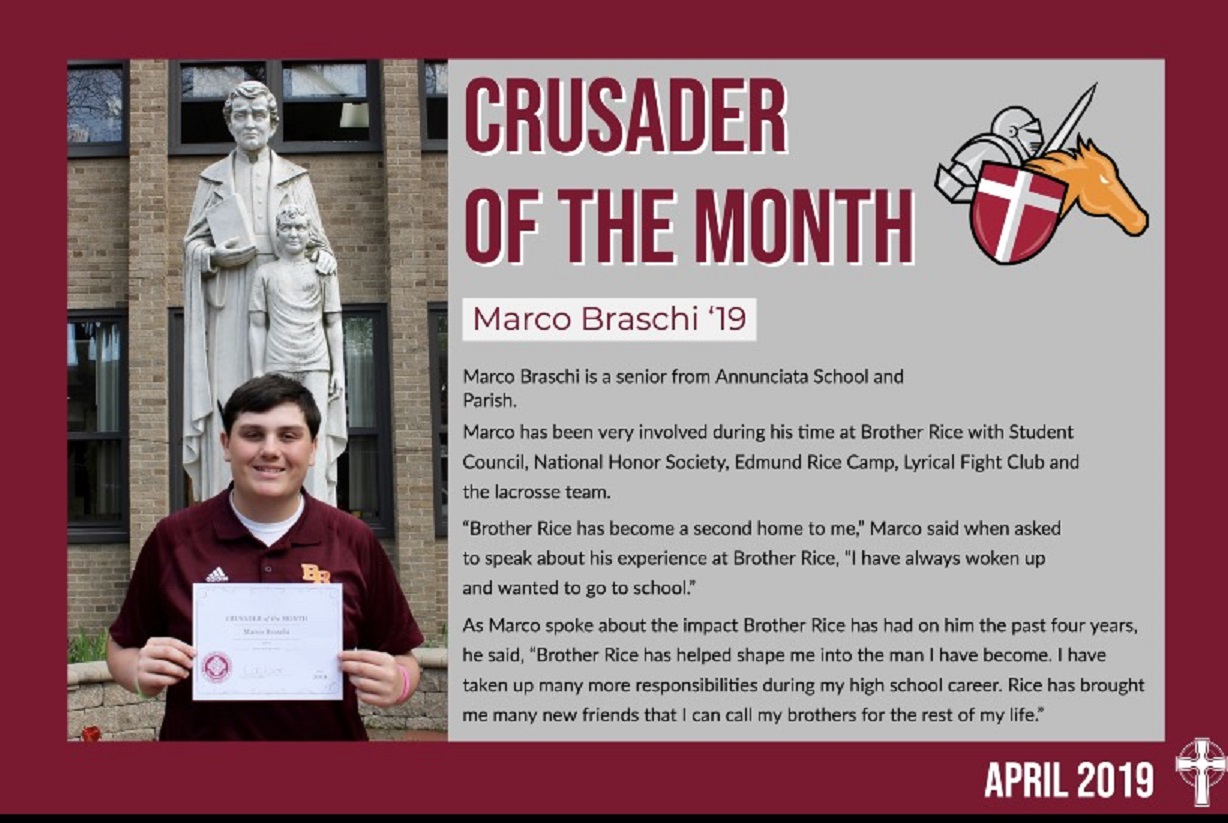 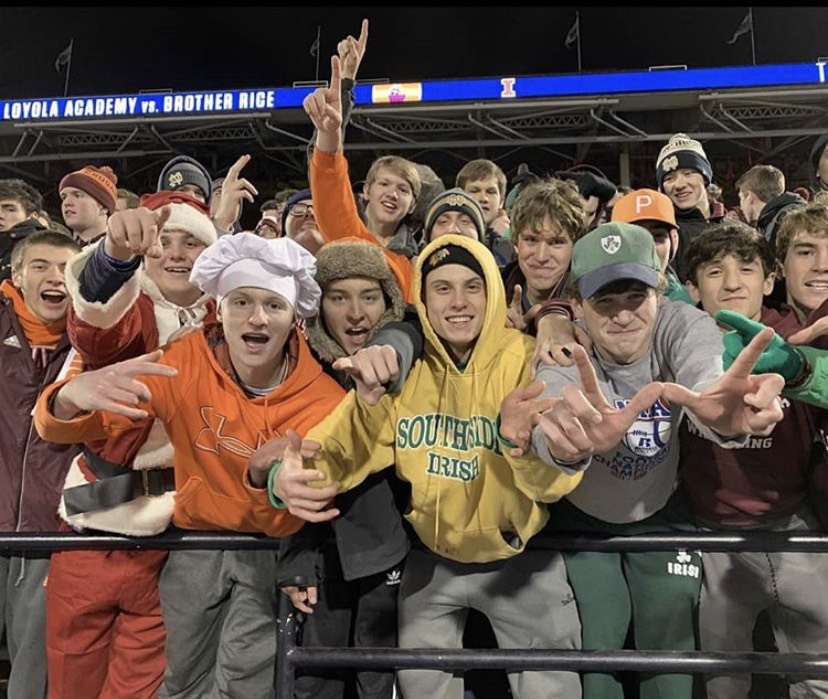 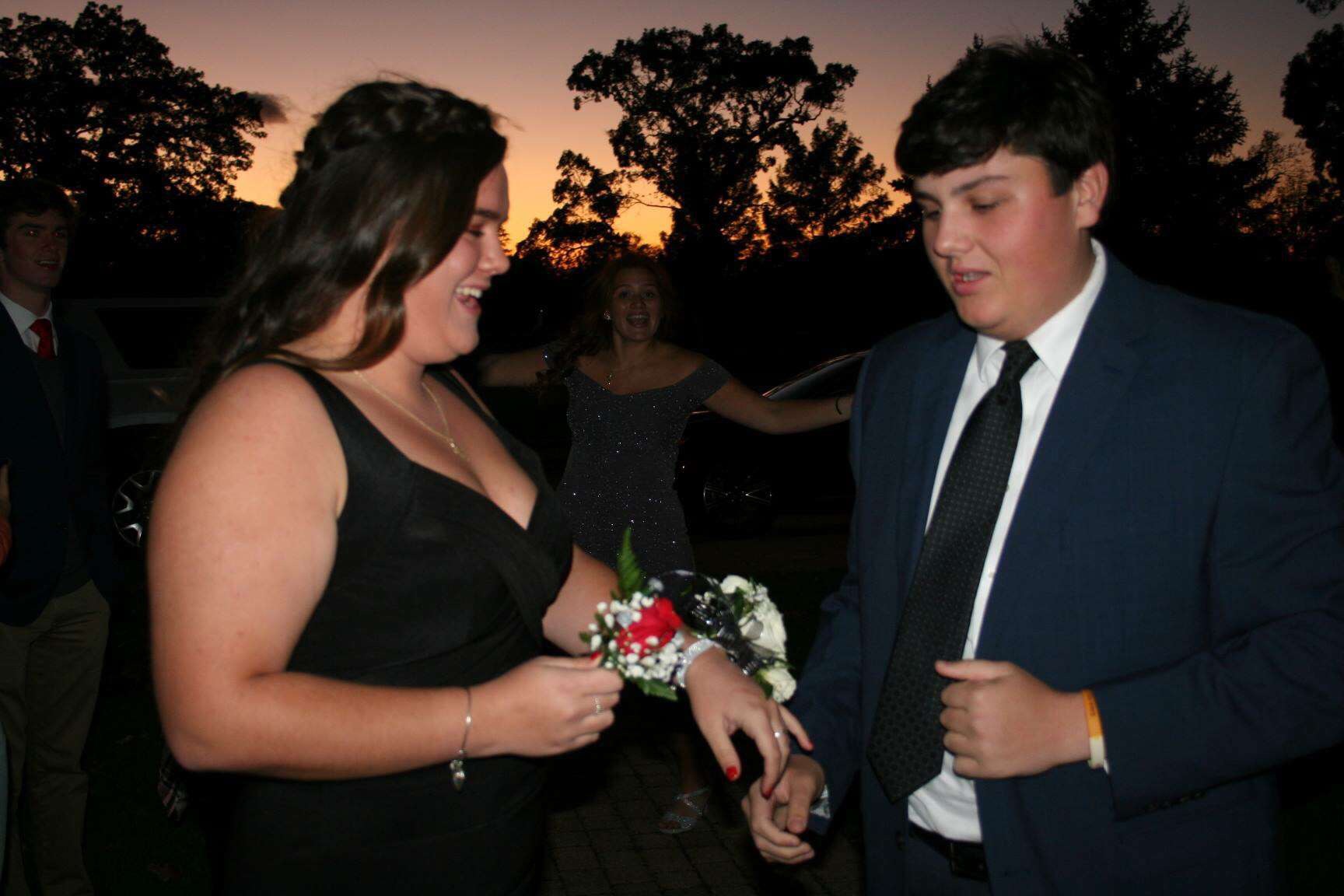 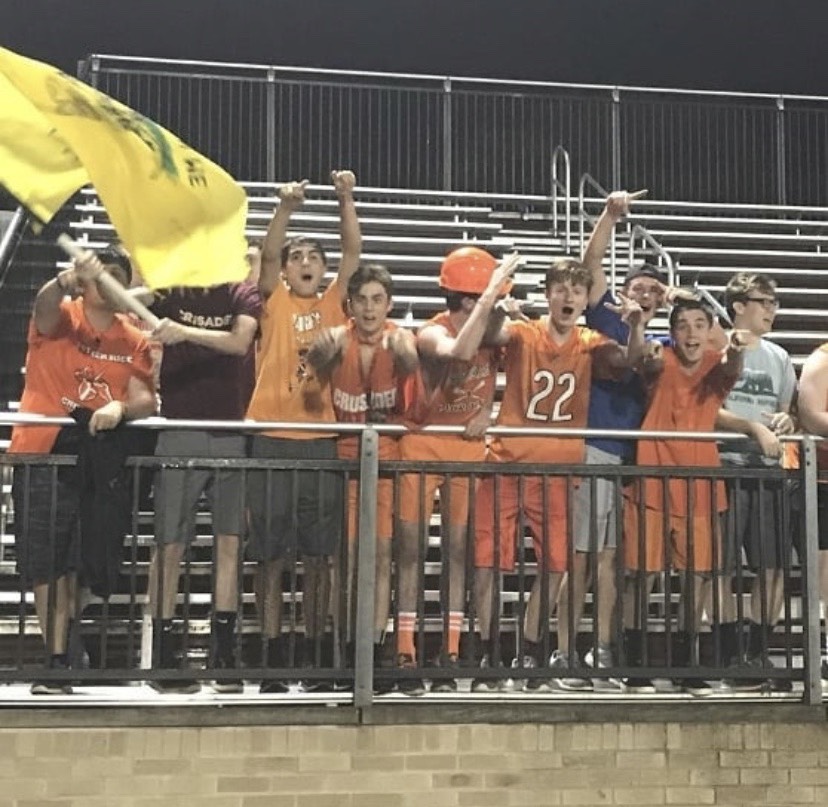 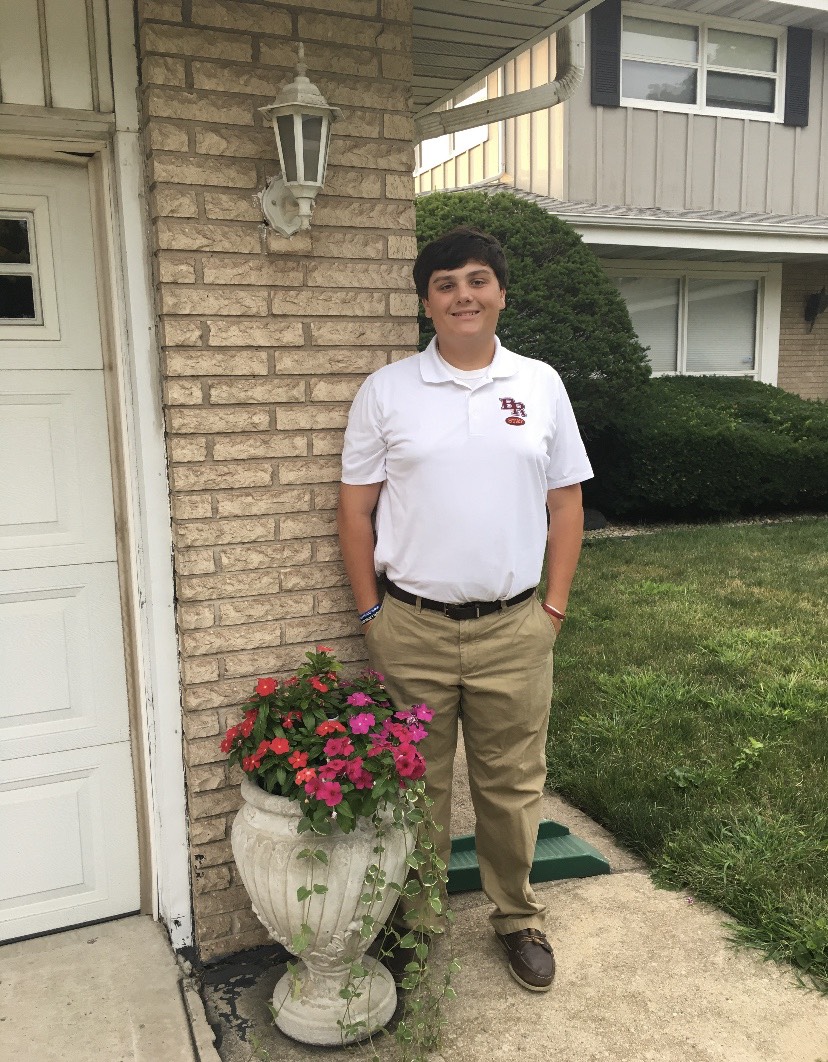 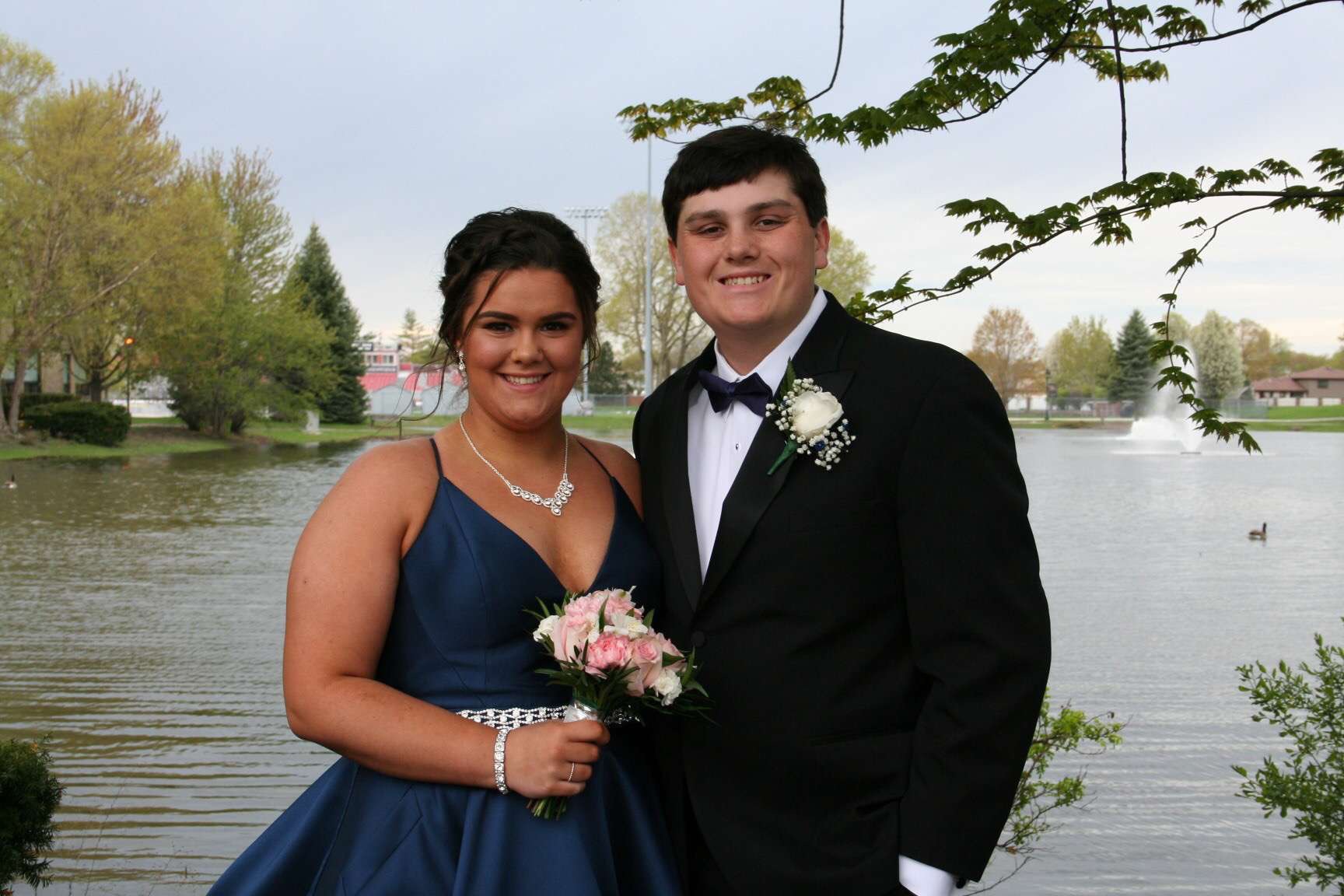 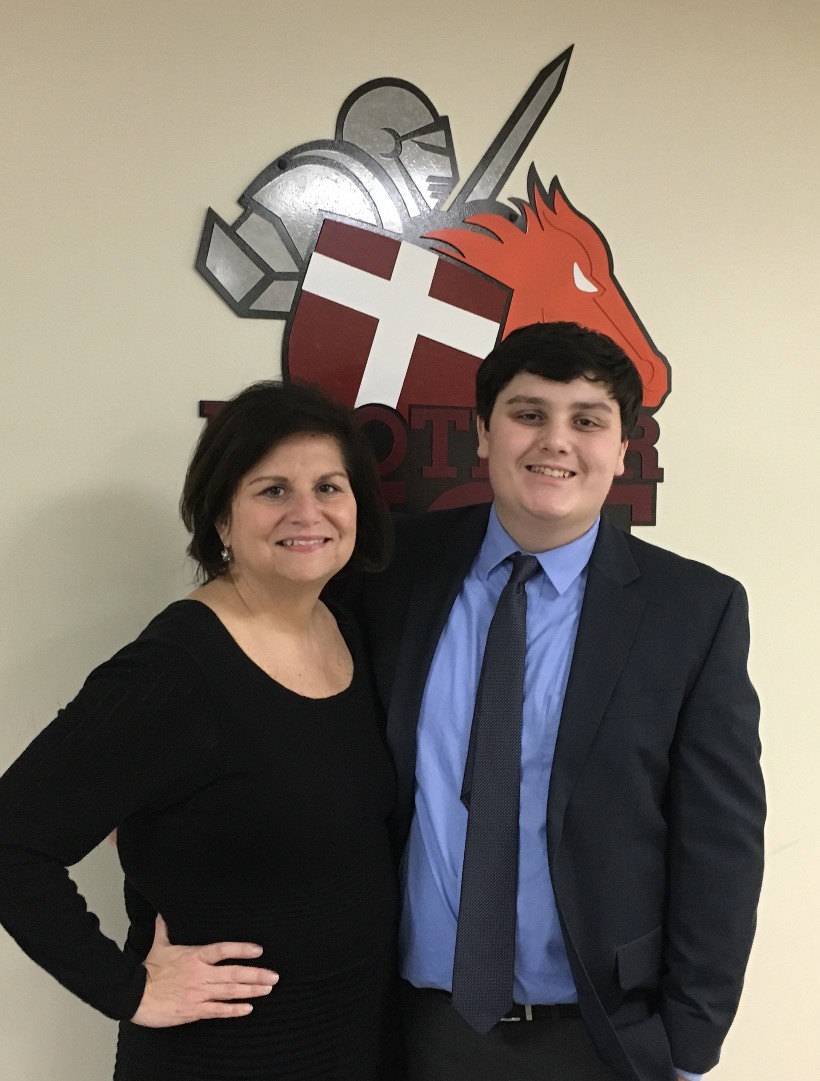