In 2012, a new national holiday was created. This holiday has been expanding each year since its creation and is becoming more known. It was created for a simple idea: a day for people around the world to do good.

This holiday is known as Giving Tuesday, and for Brother Rice High School it is one of the most important days of the year. An email sent out to the Brother Rice community stated that the goal is ¨ensuring future students have the same exceptional experience our 20,000 graduates over the past 65 years all had.¨

That standard is important because Brother Rice has a known legacy. Parents send their kids to Brother Rice because of the standard it holds. Therefore, the day of giving ultimately keeps the expectation of Brother Rice high.

Any donation goes a long way in maintaining that Brother Rice is the premiere high school in Chicago. Updated classrooms and facilities are key to having Brother Rice at the top of education choices. Furthermore, every donation is greatly appreciated and really beneficial to Brother Rice.

The theme for this year´s Giving Tuesday is ¨Give Back. Give Thanks.¨ Senior Michael Fahy and his family truly related to that theme. Fahy said, ¨Our love for Brother Rice is so strong because they helped me grow as a man, so I am thankful for them and their efforts, so I gave back to them as a thank you.¨

On last year’s day of giving, the Crusader community raised over $130,000. With seven hours left in this year’s giving Tuesday, the donation amount was at $120,000. As the day came to an end, the Crusader Fund totaled a record setting $152,268! Thanks to all the 445 extremely generous donors as well as those who spread the word. 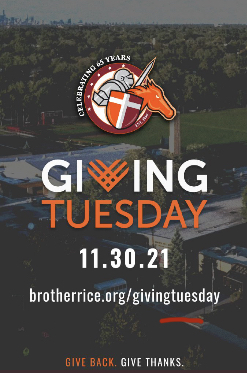