The Standard: The Tournament’s Unofficial Ending (Under Protest)

The first-ever alternate shot tournament between 12 Brother Rice seniors did not exactly go as planned.

It was ugly out at Meadows Golf Course. From the time of our arrival to the time of our departure, it rained. The temperature fluctuated in the low 40s, and the wind howled at 25 mph for the duration of the round. We had the golf course to ourselves because no one in their right mind would play golf in this weather.

Due to these weather conditions and the lack of feeling in all of our hands, the golf tournament was shortened to 9 holes. One team was in a commanding lead after 9 holes. However, since we did not finish all 18 holes, this team’s victory is under heavy protest.

Let’s see how it all played out!

The 6th place team was Aidan O’Connor and Will Stubitsch. I would say the weather affected this team the most, and it was most likely because they both chose to wear shorts to the tournament. O’Connor was the first player to tee off, and his tee shot led his team to make a quadruple bogey on the first hole putting them three shots off the lead early. Stubitsch was most likely the coldest member of the tournament, and this caused problems for him trying to hold on to the club. One could say this team was out of contention after the first hole.

The next team was supposed to be Thomas Hermanson and Sean Mahanes. I believe Durkin’s trash talk was a little too harsh on this team as Mahanes withdrew from the tournament the morning of, which put the fate of the golf tournament in jeopardy. Thankfully, Andy Sloyan answered our phone call early Friday morning to take Mahanes’ place, saving the day. After surprisingly leading the golf tournament after hole #1, the confusion of this makeshift team eventually led to its 5th place finish. Hermanson struggled to get into his normal groove after being thrown off by his partner’s last-minute cancellation.

The 4th place team consisted of Brennan O’Malley and Thomas Skrypkun. From tee to green, this team may have been the best. However, Brennan and Tom just could not get a feel for the greens at Meadows GC. This team was walking off each green with at least three putts. Although this team hit the ball very well, the “no gimmies” rule in effect was their worst nightmare. I have never seen so many short putts missed in competitive play.

When asked about his team’s putting, Thomas Skrypkun said, “It’s one thing trying to read putts, but when added with the piercing winds and freezing rain, there was a lot more to think about. The course was very wet which made the greens a lot slower.”

Conor Durkin and Nick Cipriani ended up tying for 2nd place. I will admit that the baseball players surprised me. Both of their swings looked great, and they played very solid for eight holes, holding a share of the lead for a time. The tough par five, number eight, got the best of Durkin and Cipriani. This team lost the golf tournament on one single hole that consisted of a lost ball, a couple of chunks and skulls, several putts, and two shattered morales. After watching these two guys hit some of the best shots all day, it was very unfortunate to see the Italian and Irishman throw it all away on #8.

When asked about his team’s performance on the eighth hole, Cipriani said, “We started off the tournament in contention but let the conditions get the best of us on hole eight.”

The other T-2nd team was Dan Wallace and Justin Hardiek. The “heavy favorites” of the golf tournament got off to a hot start and held the lead for most of the round (keyword “most”). Wallace’s pre-shot rituals kept him locked in, and Hardiek’s wedge play was fantastic for a while. For a second, they were running away with their lead. However, the strong play from these two led to an all-time collapse. They were in control of the tournament for six holes but then proceeded to double bogey the last three holes to finish up. Wallace and Hardiek ran out of gas, and their play showed it as they lost the lead.

Finally, the unofficial champions were Grant Matern and myself, Quinn Clifford. We played some great golf all day and hung around the lead the whole round. I was thoroughly impressed with Matern’s play and will to win. Matern hit so many range balls before the round that he needed tape for his hands to cover his new blisters. I did not see this type of competitiveness in any of our opponents. Matern and I welcomed the lead with open arms from Wallace and Hardiek on the seventh hole. By making two pars in the last three holes, we sealed the deal and took a commanding four-shot lead after nine holes. Although none of our opponents will give us the victory, it seemed as though Matern and I were heating up while everyone else was slowing down at the turn.

At the turn, some of us wanted to stick it out and play the full 18 holes, but the majority ruled, so we called it after nine to go enjoy some Portillo’s. We all still had a blast competing against each other in the unfavorable conditions. We will definitely have to make this alternate shot golf tournament an annual event.

I think there is a clear winner, but you tell me…

Well, a golf tournament planned by high school seniors in the pouring rain went just about as well as you would expect. Stubitsch and I were in for an eight on the first hole, but followed it up with three good holes. Contrary to popular belief, there is little to no chance we finished in dead last. As the round continued, Clifford’s shanks and Wallace and Hardiek’s putting slowly opened the door for Stubs and I to climb back into contention. However, at the end of the day, I believe that it was a success. The memories of eleven guys chanting as Clifford pulled out the driver and Skrypkun basically closing his eyes to read a green are far more important than a few numbers on a scorecard. We will all remember the day that we braved the elements and would be quick to do it again, depending on the weather. 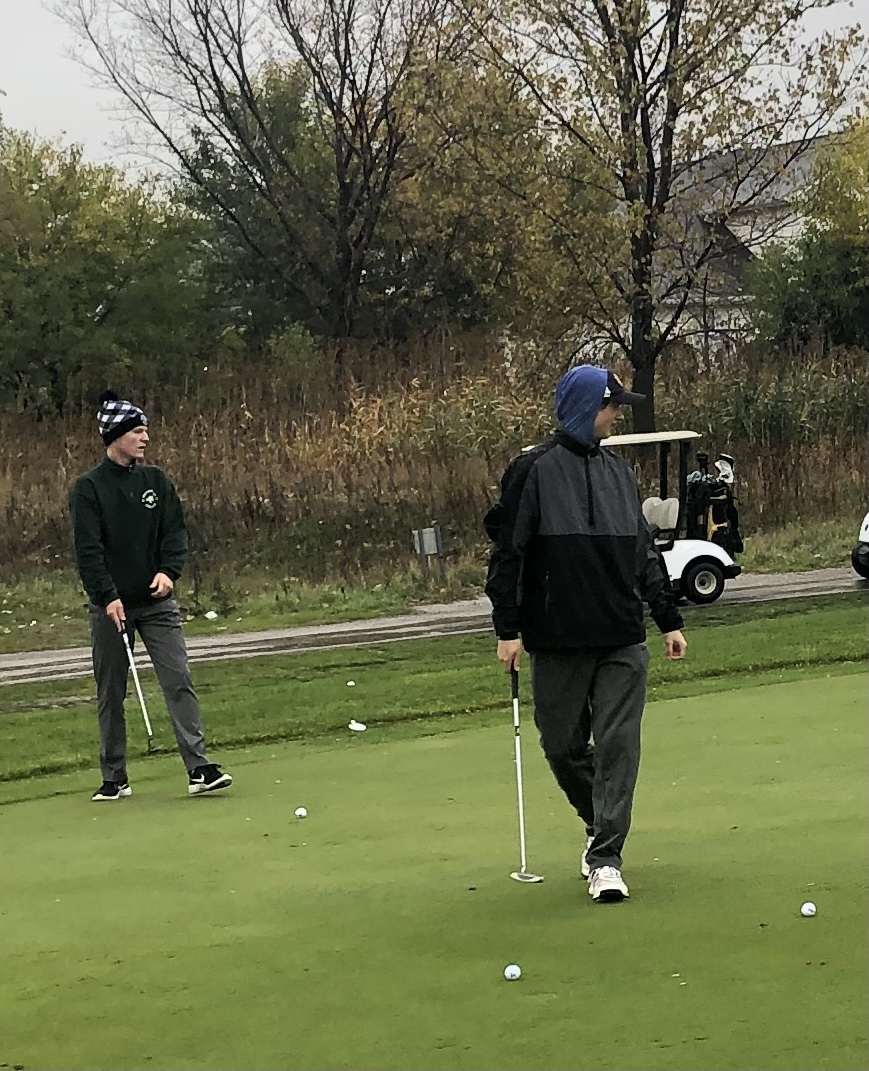 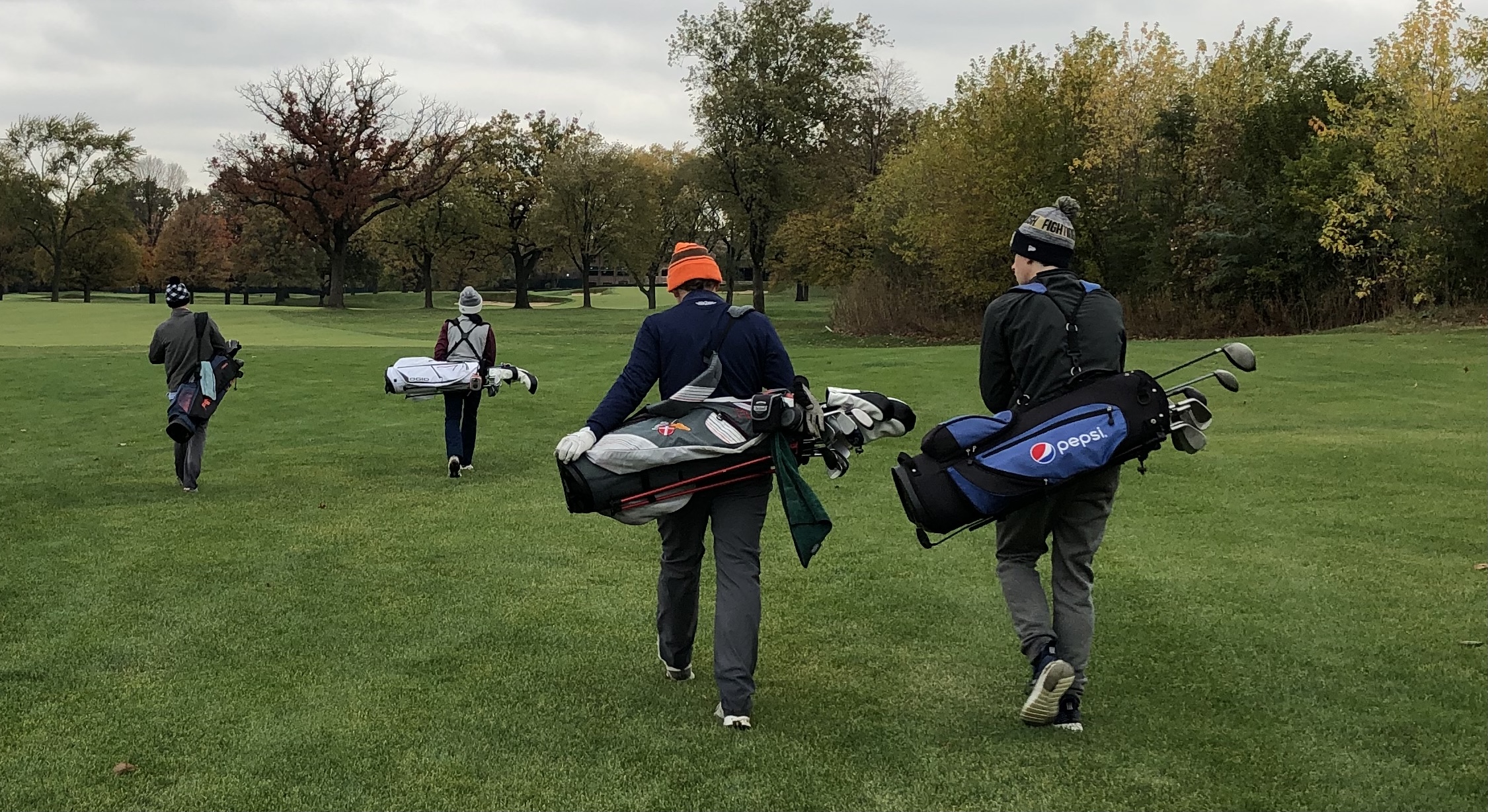